The very existence in the Maltese islands of an extensive and ancient megalithic culture has long remained an insider secret. Few people know that during the Stone Age, long before the pyramids in Egypt were built, dozens of temples were erected, all in the same style and largely according to the same unique ground plan. In the twenty or so best-preserved of these ruins the typical clover leaf pattern and orientation of their layout is clear, and six of them in particular enable us to appreciate the majestic art and architecture of this mysterious culture.

These ancient buildings pose two important questions which have never before been convincingly answered: why did the ancient people in Malta build so many temples, more than 60 of which have been recorded?  And why is there a very slight difference in their orientation, so that no two of them are pointing in exactly the same direction?

Sirius, the Star of the Maltese Temples presents a compelling solution to them. It is the result of ten years of research, during which the astronomy of the temples has been the core.

The first archaeoastronomers in Malta, George Agius and Frank Ventura, were true pioneers and they did a great job in accurately establishing the orientations. They came to the conclusion that these were not random, but that some principle must be behind them.

The discovery of this principle is the centre of the book. It is called Precession, which is the perceived very slow movement of the rising and setting points of the stars along the horizon, caused by a wobble in the earth’s axis. This movement has a cycle of 26,000 years. The result of this is that if a temple had been built towards a given star, after some time this star would have moved out of the line of sight, and another temple with a slightly different orientation would have to be constructed.

The question then is: what star could have been the focus of the temple builders?

This book shows that it was Sirius, the brightest of all the stars in the night sky, towards which all the temples’ axes were orientated at some point in time. And it is the precession of Sirius which explains the slight and non-random shift in the temples’ axes.

According to the astronomical dating resulting from this, Malta’s temple culture arose during the Mesolithic, immediately after the last Ice Age. In around 9,200 BC, after having been absent from the Maltese sky for five thousand years, the star Sirius became visible again in all its splendour above the southern horizon. As shown by the precession curve of Sirius, shortly thereafter the first temple was built.

The consequences of this discovery are manifold. It restores to Malta’s megalithic temples their rightful prime place in the history of human cultural achievement. And their early dates indicate that ancient people were focused on the movements of the stars long before agriculture was invented. We were astronomers before we became farmers.

Price: € 24,- incl. VAT and shipping to all countries in the world.

Available via this website and in all bookshops in Malta and Gozo. 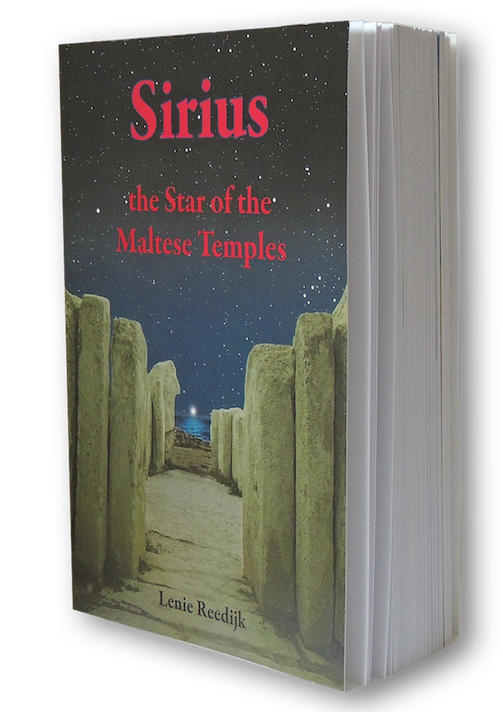 A Brief Look Inside

above the picture. Then just click on the page to enlarge.